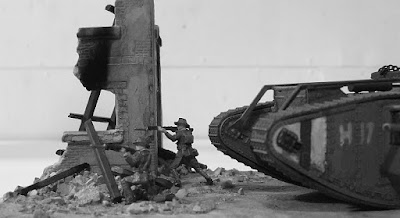 " at the final objective there was a fierce struggle with elements of I Battalion 55th Regiment. A solitary tank followed by swearing ANZACS crushed resistance "


While researching the Mk IV tank , I read about the Battle of Hamel in WW1 and found a great subject to build upon.
After years of being led into massacres by British command the Aussies were finally given a go under the control of General Monash

The Australian were given 2 British tank units and were accompanied by Americans who had never been in combat before , each American was paired up with an Anzac.
The troops moved forward towards Hamel under a creeping barrage of artillery fire , backed by the tank units , supply drops were made by aircraft and supply tanks easing the task of foot soldiers.
The Germans were completely overwhelmed and the town was taken in 93 minutes ! 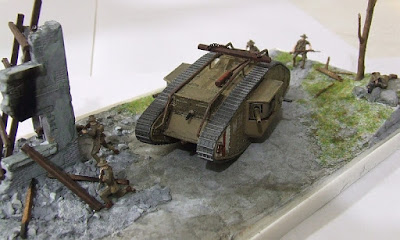 There is much more about this amazing battle but I will fill the page up quickly , so onto the dio

Using an Imex 1/25 display case as a base I set out the landform with Builders Bog , I like the bog , it dries quick and can be sculpted and sanded easily.
I used some walls from the Italeri ruined walls set , added some rubble and building debris made from small stones , sprue and match sticks, tree is real from my backyard.
The figures are HAT WW1 ANZAC Infantry and the Lewis gunner on the grassy knoll is from the WW1 ANZAC Heavy Troops set also from HAT 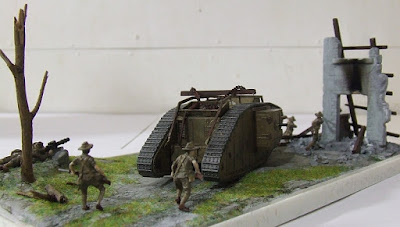 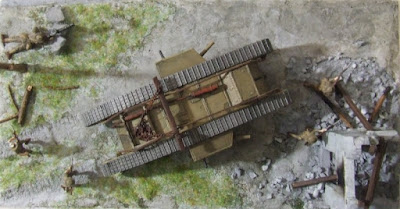 Read more about the Battle of Hamel here
Posted by Steve at 2:05 AM